"Blaine is a city at the northwest boundary and an important United States Customs port, on Drayton Harbor, Semiahmoo Bay. It was named by Cain Bros., townsite proprietors, who filed their first plat September 13, 1884. In 1858 it was an ambitious settlement called Semiahmoo, the name of the tribe of Salish Indians who then inhabited the Semiahmoo Bay Country."
-Lottie Roeder Roth, "Origin of names," History of Whatcom County. Chicago: Lewis, 1926. Chapter XLI p. 937-961.

Blaine was settled in 1856 when the U.S. Boundary Survey Commission surveyed the 49th parallel and in 1858 when the cry of gold echoed along the Fraser River, B.C. Two towns both sharing the name Semiahmoo (Central Blaine and Semiahmoo spit) prospered by the commissions activities and from outfitting the miners going north. 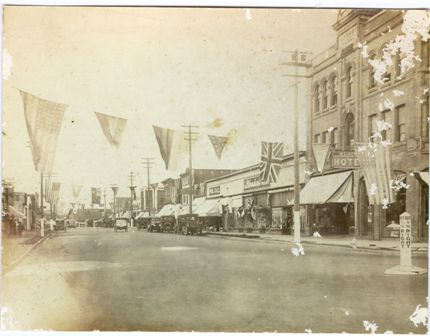 In 1881, the first salmon cannery in Whatcom County was built on tongue point Semiahmoo spit, later it became the Alaska Packers Association (APA). In 1893, the cannery packed 36,244 cases of sockeye. During the mid 1950s APA packed 100,000 cases of salmon in 1 season. APA operated a cannery on Semiahmoo spit for 75 years. The cannery was sold to the Trillium Corporation in 1982. Today, it is the present site of the 4-star resort, the Inn at Semiahmoo.

Blaine was first logged in 1876. The first saw mill was built in 1886. During 1886 and 1887, a major clearing and construction project began. Jasper Lindsey and the Milhollin brothers logged and cleared the land along E Street in Blaine. Timber from this clearing was used in the construction of the E Street wharf.