Create an Account - Increase your productivity, customize your experience, and engage in information you care about.

ABOUT: The Marine Park Shoreline Reconstruction & Naturalization Pilot Project is a proposal to create a naturalized shoreline with improved habitat, beach nourishment and enhanced recreational opportunities. The current shoreline was created in the 1960's with mostly large chucks of concrete street curbing and some quarry rock that provides little if any habitat. The jumble of broken debris is an ineffective stabilization measure which has become a hazardous deterrent to the public shoreline.

The project was awarded a $50,000 grant from the Washington State Department of Ecology Coastal Projection Program. 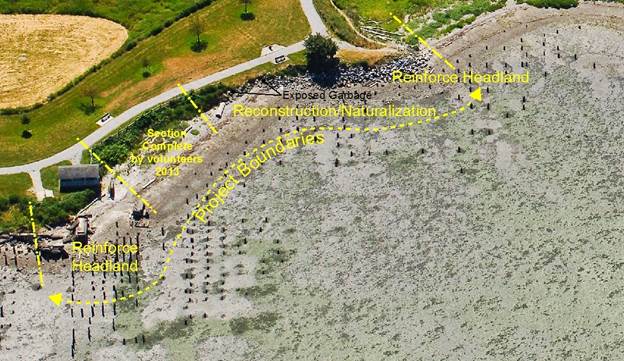 PROPOSAL: The proposal and grant request responding to this urgent situation is to reconstruct a permanent naturalized shoreline in place of a temporary emergency fix. The source of pollution of the historic dump site will be eliminated by capping the garbage with clay and installing material more typical of a Pacific Northwest beach. The broken chucks of street curbing and debris will be buried with natural stone, washed pea-gravel and sandy gravel material. This material will be held in place by the two reinforced headland bookends using boulders and rounded rock.

BENEFITS: The reconstructed shoreline will enhance the environment by creating upland native vegetation, improving spawning habitat for forage fish and keep historic waste from entering the waters of Boundary Bay and Drayton Harbor. The recreational opportunities will also be significant increased as the hazardous jumble of concrete slabs and rebar will be replaced with a naturalized shoreline.

In addition to the habitat and recreational improvements, the project will correct a recently exposed source of historic landfill. Exposed household pollution is now exposed to Boundary Bay and nearby Drayton Harbor, a 303(d) listed water body. During the King Tide storm on December 17, 2012, high wave action eroded the shoreline bank that contained a historic dump site. Material from the historic private dump (now owned by the City and contained in Marine Park) is exposed and garbage is falling onto the beach. This historic landfill material is a source of pollution into marine waters that flow towards the mouth of Drayton Harbor (Wolf Bauer, 1975 high tide drift analysis). 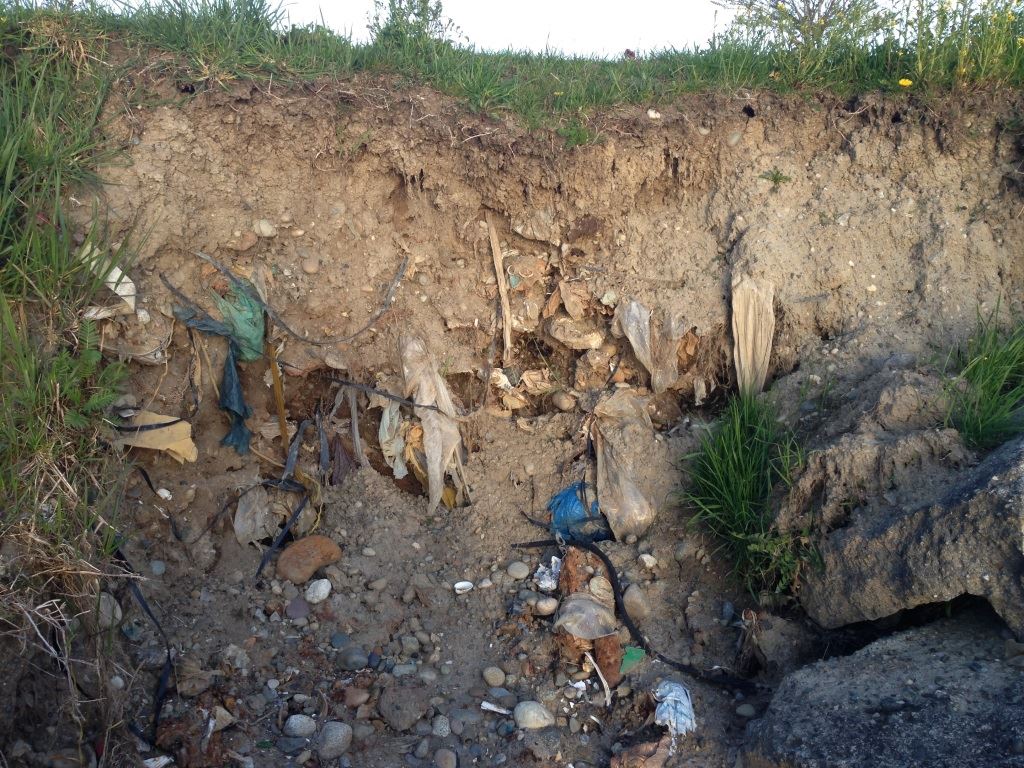 SHORELINE EROSION CONTROL: The proposal is to create erosion control structures that would attempt to mimic natural shoreline processes with low slope angles and high porosity to absorb and dissipate wave run-up and high infiltration rates in order to reduce wave backwash velocities. A naturalized shoreline will also provide beach nourishment for spawning habitat of forage fish such as Sand Lance and Surf Smelt.

A sizable, buried, armored toe would be installed adjacent to the headland in the direction of oncoming waves using angular rock and then capped with rounded rock (natural boulders to cobbles with gravel) armoring. Several large woody debris (LWD) would be incorporated along the reconstructed beach to further reduce and dissipate wave action and trap laterally moving sediment. In the intertidal zone adjacent to the western most headland, a lens of washed pea-gravel would be placed at the toe of the rounded rock armoring. This material would provide beach nourishment, fill voids in the rock armoring and create a more naturalized setting.

BEACH CLEAN UP: Volunteers or city crew will comb the adjacent beach and tideflats in the immediate vicinity to remove old bricks, tires, trash and other debris. To further the beach cleanup relic cedar pilings could be removed. There are at least 80 cedar pilings in the adjacent beach and tideflats. The pilings would be cut off 18 to 24 inches below the surface of the tide flat or beach. This involves excavating a hole surrounding the piling at low tide, using a “trash pump” to remove infiltrating water, and cutting the piling with a chain saw. Excavated material is replaced and natural wave action quickly restores the tideflats.

The final addition of washed pea gravel and sandy gravel substrate will improve spawning habitat for forage fish. Surf Smelt and Sand Lance spawn intertidally on sand and pea sized gravel. The eggs provide food for smaller fish and invertebrates, and the smelt and lance become food for juvenile and adult salmon that run in nearby Dakota Creek. This project would provide nourishment material for their spawning habitat and improve the beach for the well documented over-wintering water fowl.

The adjacent uplands and reconstructed shoreline will be planted with native plants, evergreens and dune grasses. This landscaping will create habitat where very little if any currently exists. The over-wintering water fowl and resident bird population will also benefit from the native vegetation and habitat creation.

The offshore environment is extensive tide flats, and while there is very limited vegetation on the adjacent tide flats, the Marine Park Shoreline Restoration Feasibility Report (MPSRFR) indicates that offshore vegetation includes brown algae (Fucus sp) and green alga (Ulva sp). The tideflat area nearby and down from the littoral drift of this project area does not have eelgrass present. The MPRSFR determined that placement of fine sediment on the upper beach would not impact eelgrass beds that are farther out on the tideflats, or other rare or sensitive habitat.

In the last 3 years a group of volunteers, consisting of the Blaine Neighborhood Association and Friends of Marine Park, have donated over 300 hours of labor on various projects in Marine Park, removing weeds from a native habitat restoration area, shoveling sand onto an upper beach area, but mostly in rehabilitating the upland area adjacent to the beach which is the subject of this grant request. The goal of these groups is to promote public access to the shore and to increase the active, recreational use of Marine Park. These groups plan on contributing to this ongoing work in Marine Park. Letters of support available upon request.

The pilot project will be monitored by periodically inspecting the shoreline for signs of erosion, specifically after high tide storm events. Episodic maintenance is expected which will consist of the placement of sandy-gravel beach nourishment material above the Ordinary High Water Mark. Some amounts of erosion are expected to occur and this material will be seeded and planted with native plants and evergreens following episodic erosion events. Maintenance and erosion will be recorded and photo documented in perpetuity as the City manages Marine Park.